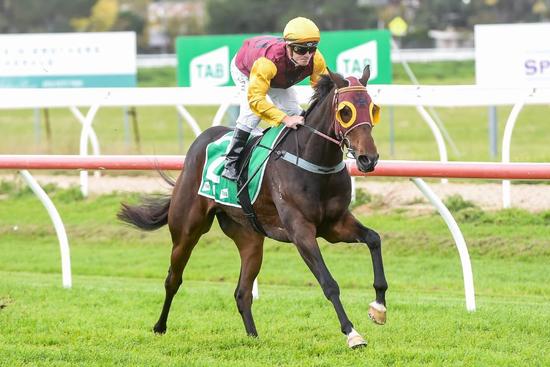 A bold front-running ride from Jarrod Fry was rewarded on Friday and saw Catcha Spark break out of maiden grade at Werribee to the delight of the geldings patient connections.

The victory from the four-year-old son of Skilled was the second individual winner from as many progeny to track for his dam, El Spark. The Shane Fliedner trained Catcha Spark was first-up from a three month spell following a Bendigo jump out victory and never looked like being headed over the 1410 metres with a four length victory.

“Her dam El Spark was also a homebred mare with Catcha Spark a third generation of our bloodlines which is very satisfying,” Wingrove Park CEO Joseph Vella explained.

El Spark (by Elvstroem) was a daughter of Dual Spark and was raced by Wingrove Park to two victories and was narrowly defeated in the 2010 Group 3 Auraria Stakes. Her first foal named Hard Spark was also trained by Fliedner to four victories and now forms part of the studs broodmare band.

Hard Spark is in foal to Sun Stud stallion Squamosa while the studs remaining broodmares Her Command and Flying Spark are in foal to Magnus.

With Catcha Spark having placed over distances as far as 2100 metres, it’s hopeful the gelding affectionately known as ‘Joe’ can continue his success over the staying distances. He is one of two horses currently racing at the Fliedner’s Racing Stable alongside Clever Spark.

Four lengths of you don’t mind ?? CATCHA SPARK breaks his maiden thanks to a brilliant front-running ride by Jarrod Fry?