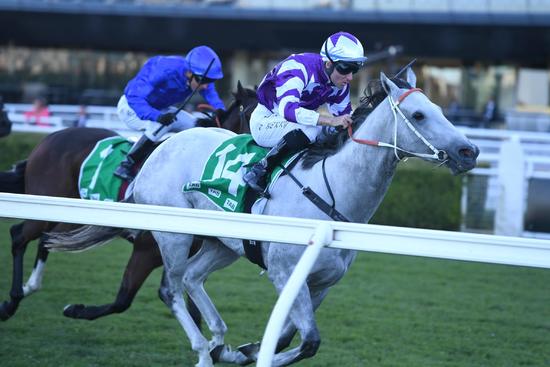 With Tommy Berry riding the near while gelding at 56kgs, Greyworm led at every call to defeat the BRC Stradbroke Handicap winner Trekking by one and a quarter lengths with the ATC Royal Randwick Guineas hero Kementari (Lonhro) the same distance back in third.

Greyworm had not been asked to contest a stakes race until his previous start when fourth in the Group III Maurice McCarten Stakes at Rosehill.

“He’s never put a foot wrong since joining our stable. He is just a pure racehorse. When they get to him he just finds more, that’s what he’s all about.

“He’s beat some pretty handy horses there but he is a handy horse himself.

“Today was his test. He has never been against this quality of horse before. Tommy rode him perfectly. He is a lovely fresh horse who is getting better as he gets older.”

Previously trained by Kris Lees and Michael Kent, Greyworm advances his record to 8 wins, 2 seconds and 2 thirds from 14 starts having been purchased on Inglis Digital for $110,000 in 2018 after winning three trials for Kris Lees.

He is the best of two winners from three to race out of the 4-time winning Dash For Cash mare Miracle Magic.

A descendant of the 1987 Group 1 VATC Blue Diamond Stakes winner Midnight Fever, Miracle Magic has a 2yo colt by O’Lonhro and a filly foal by Highland Reel (IRE).

She was covered by Galileo’s record-setting son again last spring.


Greyworm just got the better of a star studded field in the TAB Hallmark Stakes. The four horses who came in behind him are all Group 1 winners ? @HawkesRacing @TommyBerry21 pic.twitter.com/5VttW8xWqt