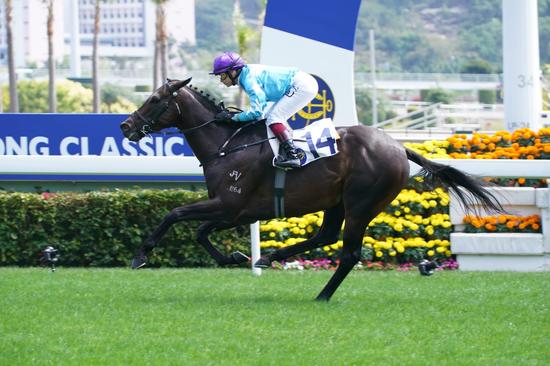 THE JAV brand was proudly on display for all to see at Sha Tin on Sunday when Wingrove Park graduate Yee Cheong Pegasus (Lohnro x Sparks Fly) was successful in claiming the Shui Cheun Handicap (1200m).

Yee Cheong Pegasus who was bred by Joseph and Daira Vella was raised in Victoria and sold at the 2016 Inglis Premier Sale to Cameron Cooke Bloodstock for $160,000 who has been a long time supporter of the farm. Originally named Powerstrike and trialling impressively at Cranbourne he was later sold to Hong Kong interests to race under the Tony Millard banner for owner Choi Hiu Fung.

Sent out the short priced favourite after returning from an injury enforced tendon injury, the five-year-old has returned in great heart this racing season with a narrow second prior to his most recent two length win after being caught three-wide under Alexis Badel.

Yee Cheong Pegasus hails from the well-renowned ‘sparks family’ and is a third generation foal. Her dam, Sparks Fly (by Flying Spur) was raced by the Vella’s and won the Listed Morphettville Guineas and placed in the Group 2 Edward Manifold and finishing fifth in the 2008 Group 1 1000 Guineas behind Gallica. She has also produced the four-time winner Flying Spark (by Denman) who is this season in foal on the property to Magnus.

Yee Cheong Pegasus was part of a three yearling draft at Inglis Oaklands Junction in 2016 offered by the Vella which also included Fiscal Fantay (Skilled x Villa Igea) who went on to be a dual Group 3 winner in New Zealand and runner-up in the Group 1 Zabeel Classic.