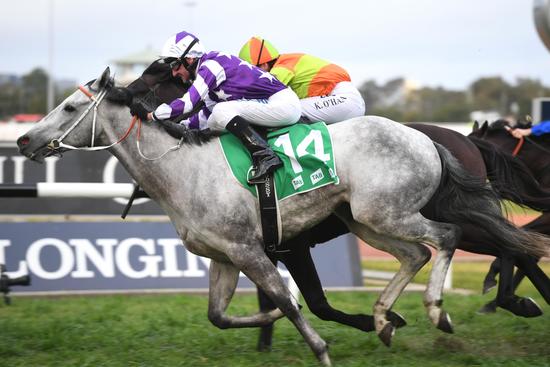 THE old saying is greys love the wet and that was certainly the case at Rosehill on Saturday when Greyworm put his head out for a determined win at Rosehill.

Toughing out the Heavy 9 conditions, the Team Hawkes galloper excelled in his first start on rain effected ground and followed up an impressive trial 11 days earlier when defeating The Everest bound Arcadia Queen.

With Glen Boss having his first ride aboard the five-year-old, the son of Master of Design came off the backs of the leaders in the straight and chased hard to real in the leader You Make Me Smile at odds of $7.50.

“He’s just a pure racehorse… it was a tough win he just tries his heart out,” Michael Hawkes explained to media post-race.

From eight starts Greyworm has now won half of his races and placed in three others taking earnings to $197,650. The win was Greyworm’s second start in Sydney since being relocated to Rosehill after a luckless first-up performance. Wingrove Park is pleased to race the gelding with Eden Park Stud’s Gary Lui.