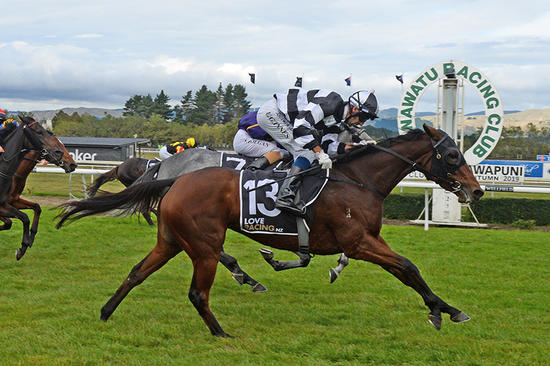 CAMBRIDGE galloper Fiscal Fantasy had to call on all her reserves on Friday to take out the Group III Property Brokers Arohanui Hospice Manawatu Breeders' Stakes (2000m) at Awapuni.

The Frank Ritchie-trained daughter of Skilled jumped from barrier 12 and settled towards the rear of the field for jockey Leith Innes, where she remained throughout.

Innes had to steer his charge to the extreme outside of the track when turning for home and the daughter of Skilled was able run down her opposition and nab Monrecour on the line to win by a neck.

Ritchie said he headed into the race with reserved expectations given his mare's wide barrier, but he was delighted to get the result.

"When we got the wide draw I thought 'not again', because she has been beaten by wide draws so many times. As the day went on it didn't look quite so bad," he said.

"She is a real sweetheart. She has got a heart much bigger than herself, because she's tiny. She never gives it away."

Ritchie said he was on the cusp of not bringing Fiscal Fantasy south for the race, but he is glad he did and she will now possibly head to the Group II Travis Stakes (2000m) at Te Rapa later this month.

"To be honest I had some trepidation about coming down for this race because she's had a hard season," Ritchie said. "But I gave her a bit of a break and the owners were all keen, so it's more their race than mine.

"She's had a hard season, but she's as tough as they come. I guess now, on this, we will have a look at the Travis Stakes. It's three weeks away. She had to show today that she was up to it (and she was), so we will look at that. "

Fiscal Fantasy was a $43,000 Inglis Premier Session II purchase for her trainer from the Wingrove Park draft and has won four races and placed eight times from 18 starts earning over $120,000 in prizemoney. She is the ninth stakes winner bred from Joe and Daira's Wingrove Park property.

She is the second stakes-winner for Commands Group I winning son Skilled and is a three-quarter brother-in-blood to Group II winner Fair Trade, who is by Commands full brother Danewin.

Fair Trade and Fiscal Fantasy are the best of eight winners from the now retired mare Villa Igea, who is also the grand-dam of stakes-winner Jonker.

Fiscal Fantasy is the fifth stakes-winner line bred to Cotehele House from 19 runners meaning it's running at 26% stakes-winners to runners, which is impressive given we aren't dealing with champion sires producing these horses which are listed as follows - Verry Elleegant(Zed), Cosmic Force (Deep Field), Fair Trade (Danewin), Fiscal Fantasy (Skilled) and Quilate (Bramshaw).