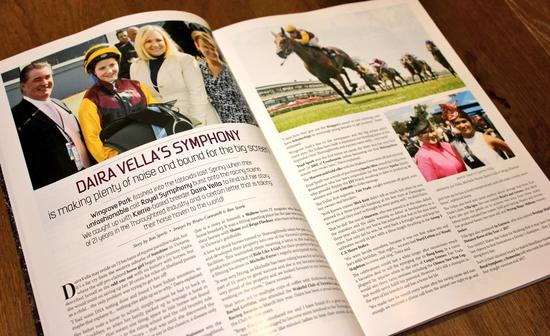 Wingrove Park flashed into the tabloids last spring when their ‘unfashionable’ colt Royal Symphony burst onto the racing scene.We caught up with Kerrie-based breeder Daira Vella to find out her story of 21 years in the thoroughbred industry and a certain letter that is taking their horse haven to the world!

DAIRA Vella may reside on 72 hectares of equine paradise today, but it’s a far cry from the western suburbs of Sunshine where the self pro-claimed ‘horse girl’ began life’s journey. Daira described herself as the ‘odd one out’ with no history in horses but she would insist on saving up her 20 cents for rides on Shetland ponies as a child… the only problem was trying to get her off!

“I got some DNA testing done and found I have Indian ancestors so maybe that explains it… nothing else adds up as to why,” Daira explained.

Her father would ride horses to school, simply because he had to back in the day, and when her family packed up to go run a hotel in rural Victoria that meant one thing – space to ride the horses not found in the cityscape. Trips to the riding school and the odd brumby ride was infectious enough for Daira – that was until she discovered the thoroughbred racing industry. As they say in the classics, a disease only cured by death.

“I went to Flemington in 1985 and saw What A Nuisance win the Melbourne Cup, I was just fascinated by the beauty of the thoroughbred, the fashions and the occasion and I was hooked,” said Daira.

It was that trip that lead Daira to buying her first horse named ‘Cynda’ who was a stock horse and lead her to meeting future husband Joe at a chance meeting at the Bendigo Showground’s (Joe is a story in himself - a Maltese born IT magnet turn horse breeder). It was a fitting meeting place for the pair who now race their horses with Shane and Briga Fliedner in that very town in Victoria’s goldfields.

A love for stock horses turned to thoroughbreds when the pair married and developed their property into one of the states premier equine facilities. So much so, it warranted a letter in the mail from the production company of ‘Ride Like A Girl’ to be used as a filming location in Michelle Payne’s anticipated movie.

“It’s very fitting as Michelle has been riding horses for us for the best part of 15 years to great success and is my favourite jockey – we’re very proud of the property and can’t wait to start working on the movie,” Daira revealed.

That letter has led to cups of coffee with Hollywood mega star Rachel Griffiths who was in attendance at the Wakeful Club’s Lady In Racing Awards in March, a club that Daira has been a proud member of for 5 years.

“Briga Fliedner introduced me and it’s a great way to encourage women to have a say, meet new people and tell their stories all while having a good time”

“I love how they give out the strappers award at the race meetings and have scholarships to encourage young women to get involved,” Daira enthused.

Wingrove Park’s line to the newspapers and big screen haven’t come easy, the Vella’s have built a reputation on breeding some of the countries best thoroughbreds and success came early… very early!

“Dual Spark was the first horse we raced and she won at her very first start in 2002 at Cranourne and gave us our first city winner two weeks later,” Daira explained.

The maroon and gold silks with the Maltese cross were off and running!

Dual Spark was a result of buying Spartacus mare Sparky Miss, one of the Vella’s first broodmares who has been responsible for the famous ‘sparks’ family who proudly display the ‘JAV’ brand and have resulted in 16 winners and over $500,000 in stake earnings.

The Vella’s first superstar would come a few years later and caught everyone off guard, even Fair Trade's owners and breeders.

“Mick (Kent) didn’t tell us much but when he was entered in a three-year-old handicap at his first start at Flemington we thought they must’ve thought he went pretty good,” recalls Daira.

That he was! The son of Danewin who was passed in at the sales defied the statistics (and the odds) winning on debut at headquarters as a three-year-old. Only one horse has achieved that feat in the nine years since. Not only did he win, he went back a fortnight later and kept his unbeaten record in tact with a three-length thrashing in the Group 3 C.S. Hayes Stakes.

“We were beside ourselves because it was our first stakes win and Joe’s 60th birthday that night… we even got Daryl Cotton and Wendy Stapleton to come and sing,” Daira said.

The celebrations would last a while longer after connections struck a lucrative deal to sell the emerging star to Hong Kong. In a career plagued by injuries, in the care of Caspar Fownes, Fair Trade would win three races abroad including the Chinese New Year Cup but never fulfill his potential. However, he’s still a champion in the eyes of his breeders and has a home for life.

“We made sure he would come home after his racing career and sure enough we got a phone call from the airport one night to go pick him up – he has a lovely temperament and is going to make a lovely show horse,” explained Daira.

You couldn’t blame the Vella’s for thinking that it may have been their last chance to find themselves a Group 1 champion… they don’t come along every day.

Such their uncanny knack to match bloodlines however, along came the Royal Symphony – a Domesday colt who took the industry by storm with four straight victories mid last year.

“They have made us part of their family and celebrated his wins with us so it’s been a very special time,” Daira said thank fully.

Daira says there was something about the colt from his early days. His rock star looks and phenomenal mother.

“Royal Symphony was always a smarty pants and had a bit of a boisterous ‘look at me’ attitude as if he knew how good he was,” Daira said.

Despite his dam being a half-sister to the legendary Naturalism and having produced seven winning foals herself, he was unwanted as a yearling but that certainly wasn’t the case with punters when Royal Symphony was desperately unlucky in the ‘stallion making’ Caulfield Guineas and a gallant fourth in the Cox Plate.

Extraordinarily, he has put the myth of old broodmares not producing good foals to rest, mum is 25 years-old and has produced 15 foals.

“He’s got our brand on and we brought him into the world and he’s in one of the best races in the world,” Daira explained.

Royal Symphony is one of nine black-type earners and a further nine metropolitan winners all from Wingrove Park‘s boutique broodmare band. With 54 paddocks, it’s own equine hospital, indoor arena and magnificent homestead it’s any wonder it’s been a nursery for breeding winners.

Daira’s success on the racetrack has been matched in the show ring with her most notable honour coming at the Melbourne Royal Show winning Reserve Champion hack with Wingrove Image who won the Grand Nationals as a five-year-old.

Whether it be in the show ring or on the racetrack, there’s no luck involved when it comes to quality horses following Daira Vella.

If Royal Symphony is to fulfill his promise and provide the Vella’s with their maiden Group 1 success this coming spring, you can thank What A Nuisance for giving Daira Vella the racing bug!

Written by Ben Sporle - this article was published in the Spring edition of the Ladies In Racing Magazine.