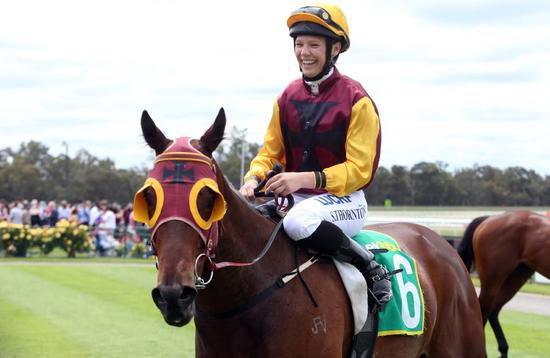 It was the fifth time in the last eight years Fliedner had stood in the winners’ circle on Bendigo Cup day. He failed to land a winner in each of the last two years, but at least came close on four occasions in 2015 with a quartet of second placings.

“I’m always happy to get a winner, especially here at Bendigo on cup day,” he said.

“(Wins) are hard to get; they’re not an easy thing.

“Our (local) horses probably aren’t as well-bred as some others, but this little mare always runs well here.

“A thousand metres has always been a touch short for her, but I had her as fresh as I could possibly have her and she got the job done.

“The horse she beat had to lump a bit of weight – but they have weight for a reason and that’s because they have ability.”

Fliedner said Flying Spark, the daughter of Denman and Sparks Fly, had been set for the race as far back as September, when she finished third over 1100m at Bendigo.

“She covered a helluva lot of ground, but wasn’t far away. I thought she just peaked on her run at the end of the 1100m,” he said.

“Then I saw this fillies and mares’ race and thought it was a lovely race.

Flying Spark was patiently ridden by apprentice Stephanie Thornton, who has partnered the mare at her last three starts.

Thornton said she was enjoying the association with the Fliedner sprinter.

“She has been super for me her past three starts and that is now two wins on her from three starts,” she said.

“Full credit to Shane, he had her in super order, dropping back to the 1000m.

“She was nice and fresh and got the job done well.

“Coming into the straight I was very confident.”

Flying Spark finished less than a length ahead of the Brent Stanley-trained Balancing Act.

The Cranbourne sprinter Shining Star edged out the Bendigo-trained All About Nicci for third, to narrowly prevent an all central-Victorian trifecta in the race.

Fliedner, whose other runner for the day Pray For Us was unplaced in the final race, said Flying Spark would likely be set for another race on her home track.

“We won’t take her far from Bendigo – she has an impeccable record here,” he said.

“She’s won all her races here, so why would you go anywhere else?”