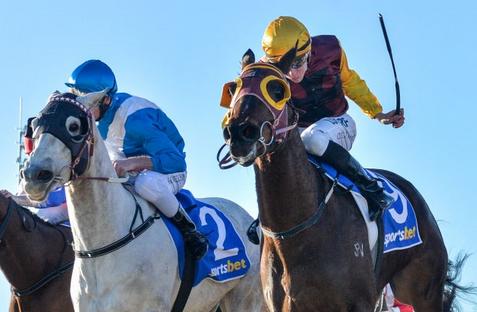 WINGROVE Park opened their account for the season with a successful 24-hours last week courtesy of homebred thoroughbreds More Spark and Flying Spark.

Domesday mare More Spark made her first start on the polytrack a winning one, when she rised to the mile last Thursday at Pakenham in the $25,000 Sportsbet BM64 Handicap. Michael Dee who had ridden the five-year-old to a narrow defeat the circuit last year made sure the five-year-old got the bob when it counted over odds-on favourite Petracca.

Sent out $21 with punters, More Spark was third-up from a spell after two closing efforts when covering ground at Mildura.

“We were pretty happy to draw Barrier 1 and give her a chance to race more forward… she has always promised a lot but I think this is the best I’ve had her,” trainer Shane Fliedner explained.

That ability saw her defeat subsequent Group 1 winner Howard Be Thy Name at her only victory. Fliedner has trained three of the Dual Spark progeny to victory including dual city winner Sparks Alight and black-type earner Sparks Burn.

Less than 24 hours later and closer to home, the stable saddled-up Flying Spark to her third home track success. The Denman mare hails from a daughter of Dual Spark (mother of More Spark), Sparks Fly, who Mick Kent trained to win the Morphettville Guineas and finish fifth in the Thousand Guineas.

Ridden to textbook style from Stephanie Thornton in Heat 3 of the Rising Stars Series, the win was a first leg of a double for the young hoop, while once again upset odds-on punters outdoing the Ciaron Maher trained Natch in a photo finish from Barrier 1.

“We might set her for Bendigo Cup Day now which she has placed on twice before now,” part-owner and breeder Joe Vella explained who races the mare with wife Daira.

Wingrove Park could be in for a big few months, as the breeders of Royal Symphony who returns next weekend at Flemington, while their Bendigo Middle Distance Horse of the Year In Fairness has returned to the Fliedner stables this week.