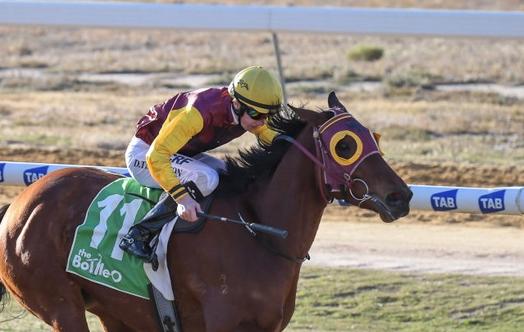 THEY say never underestimate a mare in form. After taking 20 race starts to register her maiden win, Her Command traveled to Mildura on Monday in career best form and subsequently made it two wins on end.

Connections can lay claim to winning the final race of the 2016/17 Victorian Racing Season with the triumph coming on the last day of the Command’s mares four-year-old career.

“She’s made a mockery out of me I said she might never win a race and she’s won two in a row,” rider Damien Thornton told Racing.com post-race.

The final of trainer Shane Fliedner’s 17 winners for the season also made a mockery of punters, sent out a drifting $16 chance holding off the challenge from fellow Bendigo rivals Weave and Ribbon Of Choice.

“Her Command has been late to mature but she’s furnished into a lovely mare who is starting to live up to her pedigree page,” Wingrove Park CEO Joseph Vella explained.

Hailing from the sire of over 900 winners including Commanding Jewel, Holler, Gregers and many other topline performers by Commands.Her mother, Villa Igea, is closely related to the stallion and a prolific producer herself including Group 3 winner Fair Trade and stablemate and dual city winner In Fairness.

Interestingly, Her Command is just the second female of seven winning foals from the dam putting her in great demand for the breeding barn. Villa Igea is now retired having produced thirteen foals who have collectively won 34 races.

Into her fourth campaign, the bay mare has only missed a cheque in one of six runs this preparation when tested over 1600 metres. Settling last in the 13-horse field, Her Command was momentarily held up for a run on straightening but again possessed a sharp turn of foot to overhaul her rivals.

“It’s a great show of faith from the owners who are now being rewarded – she has however always shown ability with eight placing’s and some of those behind subsequent metropolitan winners,” a proud Vella said.

The win was a fairytale finish to the 2016/17 Racing Season, which saw the Wingrove Park silks in the winners stall on nine separate occasions – highlighted by two metropolitan wins from In Fairness. Horses bred on the farm proudly sporting the ‘JAV’ brand would win fourteen races, which includes boom colt and Caulfield Guineas favourite Royal Symphony.