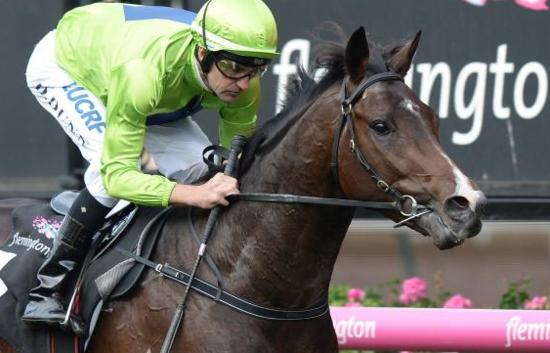 THE unbeaten run of Domesday colt Royal Symphony extended into black-type success at Flemington on Saturday, when the colt joined an honor roll of five stakes winners bred by Wingrove Park, with a devastating triumph in the Listed $120,000 Taj Rossi Series Final (1600m).

The 4¼-length annihilation enhanced his favoritism in the ‘stallion-making’ Group 1 $2 million Caulfield Guineas (1600m) on October 14, 2017.

“Royal Symphony is a very special colt to us – he is the last foal out of the long serving Naturalist and it looks like she saved the best till last,” enthused Wingrove Park CEO Joseph Vella.

While the 24-year-old mare is enjoying retirement on the property, she has left a large legacy producing eight winners. Royal Symphony is the sixteenth foal and bred on the breeding line of The Minstrel and Nearctic on both sides of the bloodlines – dating back to the foundation mare, Natalma.

“Saturday’s win was over 1600 metres but his pedigrees suggests the best may still be in front of him– let’s hope he becomes out first Group 1 winner which would be a huge achievement for a stud of our size,” Vella stated.

Saturday’s win came 14 days after his success over 1400 metres and made it three wins by a combined 11.3 lengths with total prize money totaling $141,950. It is believed prior to Saturday, connections (who include 2x Caulfield Guineas winning rider Dwayne Dunn’s wife Amanda), had knocked back offers in excess of $2 million for the colt.

Forced to carry 59 kilograms, the horse missed the start and settled in the back half of the field, but punters who took the $1.50 we’re put to ease when he claimed the lead at the 250 metre mark and didn’t look back.

“He looked like a horse of real substance today, that’s what we’ve always thought of him and, now that we’ve seen it twice I’m really comfortable putting him away and thinking the spring is the right thing to do,” trainer Tony McEvoy said post-race.

Group 1 races including the VRC Derby and Cox Plate have been floated as possible spring riches while the $750,000 Group 1 Australian Guineas (1600m) at Flemington on March 3, 2018 appears a logical autumn option. The Australian Guineas is a race familiar to the Vella’s who bred and raced the dominant pre-post favourite Fair Trade in 2009 who was sold to Hong Kong prior to the event.

Fair Trade was unbeaten in two starts at Flemington but was passed in at auction as a yearling while Royal Symphony wasn’t accepted into the leading yearling sales in 2016. Wingrove Park began in 1997 and boasts an elite strike-rate of winners to runners with first-class facilities located opposite Sun Stud and sharing the same postcode as Spendthrift Farm.

Royal Symphony in anticipated to return to the racetrack in late April as a three-year-old, en-route to the Caulfield Guineas we’re he hopes to join the honor roll of the likes of Vain, Mahogany, Redoute’s Choice, Lonhro, Weekend Hussler, Starspangledbanner and All Too Hard.