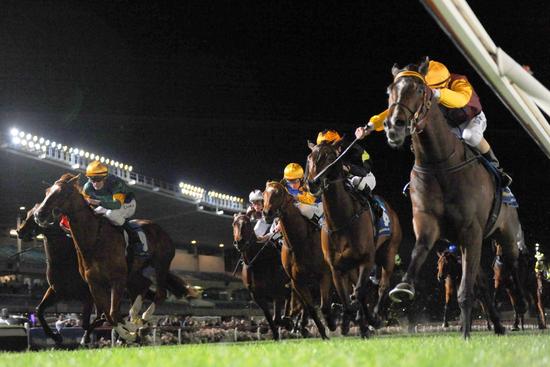 FRONT-RUNNING son of Denman, In Fairness, proved he’s just as effective on rain-affected ground when saluting in the feature $50,000 150th Anniversary Handicap (1400m) at Cranbourne on Friday night.

While the Cranbourne Turf Club were celebrating 150 years of racing at the course, connections of the Shane Fliedner trained galloper were celebrating the five-year-olds sixth victory. Young gun Ben Allen became the third hoop to pilot the horse to victory, who found his customary front running role and held challenges at bay for a tenacious ½ length victory.

In Fairness was sent out an $11 chance on the back of a narrow defeat post a freshen-up to subsequent Caulfield placegetter Curragh a month earlier.

“He took good benefit from his first-up Ballarat run and was well suited back onto a tighter circuit where he can accelerate quickly off the bends,” managing owner and breeder Joe Vella of Wingrove Park explained to Winning Post.

The triumph was the dual city winner’s most notable victory coming at benchmark 84 level and places Fliedner one win clear in the Bendigo Trainers Title and with a prominent player for the Horse of the Year title at seasons end. The horse will be aimed towards the $100,000 Swan Hill Cup (1600m) on June 11.

Friday’s victory took the horses stakes earnings to $133,975. In Fairness is the half-brother of the Vella’s Group 3 winner Fair Trade - who was subsequently sold to Hong Kong following two undefeated runs at Flemington in 2009.