Miss Octette sends out 2016 in style on New Year's Eve! 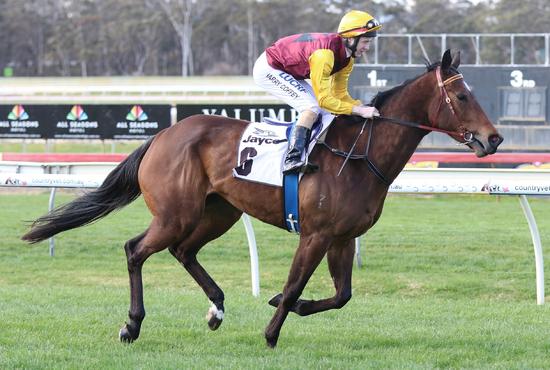 The five-year-olds triumph took the studs tally to nine victories for 2016 – with six of these coming in the final two months of the calendar year.

Saturday’s victory was a late Christmas present for connections of Miss Octette, who has been a late maturing mare and now into her third campaign after just eight career starts. Partnered by Harry Coffey, the mare overcame a wide alley and landed a box seat run before being presented on the home turn and claiming the lead at the 200 metre mark for a dominant 1¾ length victory.

Miss Octette was installed third favourite at odds of $4.60 on the back of two encouraging runs this preparation. Kicking off her campaign over 1450 metre on rain effected ground at Kyneton, the mare finished third behind two encouraging horses before in counting little luck but sticking on bravely at Bendigo 13 days earlier.

“Last time in she was quite dour and not really concentrating but this time in all three runs she has been up on the speed and on the bridle and a lot bigger, stronger and smarter which is why she won today”

At what was her second run over 1600 metres from three starts this campaign, her trainer Shane Fliedner expects her to continue to excel over longer distances.

The victory was a landmark occasion for her breeders Joe and Daira Vella – as Miss Octette was the first winner from the dam Irreversible (by Last Tycoon) of whom they bred and raced. Irreversible hails from the dam Villa Igea who has produced notable thoroughbreds for the stud including Group 3 C.S Hayes Stakes and Hong Kong winner Fair Trade as well as recent dual metropolitan winner In Fairness.

Wingrove Park would like to thank their valued clients for tremendous support throughout a successful 2016 and wish many more victories in the New Year!