Allen holds the key to Hard Spark as winners flow 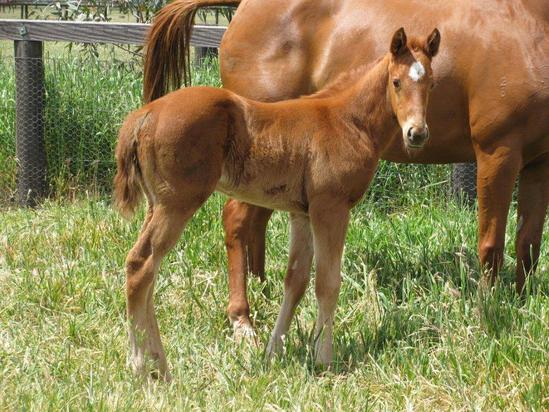 THE triumph by Hard Spark on Tuesday at Wangaratta provided Wingrove Park with a winner for the third consecutive week - the chestnut  dominant in breaking her maiden status.

The daughter of Hard Spun was a deserving winner having previously placed on five occasions. Into her third campaign, the chestnut mare was well backed following two promising thirds at her pair of runs back from a spell.

With Ben Allen having just his second ride for the stud, he positioned Hard Spark (pictured as a foal) comfortably behind the leaders – aided by the removal of blinkers. Tracking well leading into the straight, the mare strode clear and opened up a winning break that was never impeded saluting by two lengths.

“I think the key was getting the blinkers off and we we’re able to take a sit –she will definitely win a few more races,” star apprentice Ben Allen explained.

Tuesday’s victory was significant one for the stud as Hard Spark is the first foal to hail from the Elvstroem mare El Spark. The dam was also raced and bred by Joe & Daira Vella and won on two occasions and placed in Group 3 company when narrowly denied victory in the 2010 Group 3 Auraria Stakes.

The win was just Hard Spark’s third run beyond 1100 metres - a positive progression as her dams two wins came beyond 1600 metres.

Hard Spark is a third generation breed of the stud with El Spark part of the successful Dual Spark progeny. On the property the stud has her latest progeny, a bay colt by Skilled, meanwhile El Spark was sold at the 2016 Great Southern Sale for $24,000.

“We are very proud of this mare as she is part of a successful family we have bred and raced for over a decade – it is very satisfying to see a second daughter of Dual Spark producing winners,” explained Wingrove Park C.E.O Joe Vella.

Congratulations to the mares band of connections who were rewarded for their patience after 14 career starts - we are hopeful it won’t be her last! The victory was a significant one for her strapper and part-owner Toby Lake who enjoyed his first success as a racehorse owner. Toby plays an integral part with all our horses at Fliedner’s Racing and is also a success amateur rider having ridden 27 winners in just three seasons of riding.

Toby’s dedication, along with the entire staff at Fliedner’s Racing are to be highly commended on the recent success of our team. The stud has prepared six winners for the calendar year – three since November 18 – plus a frustrating 19 placegetters.