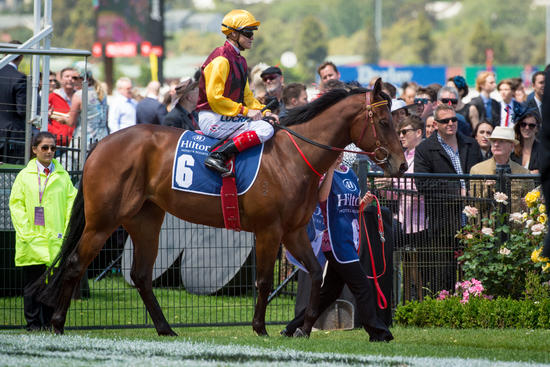 FLYING SPARK made it two victories in the space of 12 days for Wingrove Park following her gallant triumph at Bendigo on Wednesday, when the mares class prevailed in the $23,000 My Punter Fillies & Mares BM64 Handicap (1100m).

The four-year-old shares the same stallion, Denman, as the studs most recent winner In Fairness (18/11/2016).

Wednesday’s victory was the first in partnership with jockey Luke Nolen – who guided Flying Spark to a comfortable one length triumph on her home circuit. Sent out race favourite at her fourth run back from a spell, Nolen settled wide on the speed in the small field and took the lead at the 200 metres - drawing away to hold off the challenge of Tycoon Beauty.

“It was an excellent training effort by Shane to keep her stimulated and change her training routine to get this mare back into her peak form and it clearly paid dividends,”explained Wingrove Park C.E.O Joe Vella, who bred and owns Flying Spark.

Following an eye-catching resumption on Bendigo Cup Day, Flying Spark had raced somewhat below par in her subsequent two starts. Backing up within six days since her last performance, trainer Shane Fliedner elected to apply blinkers for the first time and reduce her distance to 1100 metres.

The formula proved a winning one, helping to register the mares second career victory and takes her earnings beyond the $50,000 mark.

Flying Spark holds considerable residual value as she hails from the dam Sparks Fly, who was a stakes performer for the Vella’s winning the 2008 Morphettville Guineas. Her race record also included a third placing in the Edward Manifold Stakes and placed fifth twice at Group 1 level in the 1000 Guineas and Schweppes Oaks.

From three foals, Flying Spark is the only progeny to have raced with her half brother by Lohnro selling at the Inglis Premier Yearling Sale for $160,000. Sparks Fly was later sold for $52,000 in June at the 2016 Inglis Great Southern Sale. Her 2013 foal by Medaglia D’Oro remains on the property named Sparks D’Oro.

The mares triumph topped what was an afternoon of competitive horses from our stable, with close relative More Spark running a gallant third in the final race over 1600 metres. The daughter of Domesday looks set to peak over a longer distance and reunite herself with the winners circle. Meanwhile, Her Command wasn’t far away finishing fifth less than three lengths from the winner in a competitive maiden affair.

Since October, Wingrove Park have saddled up 12 runners and won two races with six further placings.