In Fairness returns a city winner at The Valley 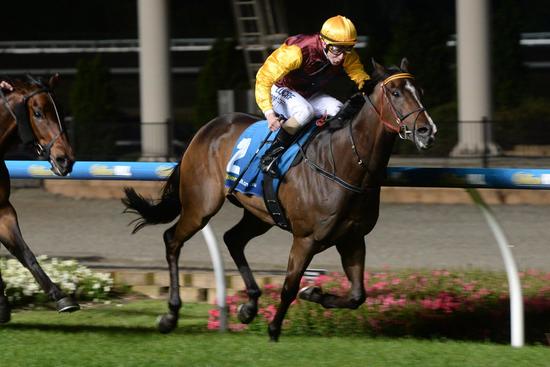 IN FAIRNESS  joined the honour roll of fourteen metropolitan winners bred by Wingrove Park and in doing so became the fourth city winner from the dam Villa Igea when taking out Friday nights $35,000 Marcus Oldham Agriculture Handicap (1200m)at Moonee Valley.

The son of Denman who was bred from the Kerrie property, created a big impression in doing so – leading from barrier to box with an impost of 62 kilograms.

Friday’s victory was a sentimental one for trainer Shane Fliedner and wife Briga whose nephew Harry Coffey piloted the horse brilliantly to victory – the pairs first city winner. The triumph was Harry’s fourth in the Wingrove Park silks and third aboard In Fairness.

The lightly raced five-year-old was having his first run back from a spell, following two impressive trials, on the back of his last campaign which culminated in three victories. A dominant first-up winner last preparation, In Fairness was dealt with the outside barrier but soon offset the disadvantage finding the rail after 400 metres.

“He is a horse who posses great natural speed and we identified would be suited to The Valley – he rails corners superbly and with his determination they struggle to catch him,” explained Wingrove Park C.E.O Joe Vella, who bred and owns In Fairness.

In Fairness is raced by breeders Joe and Daira Vella and their daughter Lauren, trainers Shane and Briga Fliedner and long-term employee Ben Sporle – who also works at the Moonee Valley Racing Club.

Clocking 1.10.81 for the 1200 metre journey (the quickest of three races over the distance of the evening) the stud has high hopes for the preparation ahead.

“Considering the weight he carried and the vigorous riding tactics from an unfavorable barrier, it’s fair to assume the horses class shone through and we’re hopeful it won’t be the last time he finds himself in the winners circle – especially as he increases in distance,” Vella believed.

If breeding is anything to go by, In Fairness has some catching up to do on his highly fancied pedigree page – but is well on his way! His dam Villa Igea hails from the famous Eight Carat and Cotehele House bloodlines and while a dual winner herself – has her highest accolades in the breeding barn. Closely related to champion stallions Danewin and Commands – Villa Igea has produced six race winners who have collectively won 32 races. Most notably the studs banner horse and international flag bearer Fair Trade, by Danewin, who won the 2009 Group 3 C.S. Hayes Stakes before being subsequently sold to Hong Kong undefeated (won three races at Sha Tin).

There will be a chance to add a seventh winner to the pedigree page on Thursday at Bendigo when Harry Coffey takes the ride aboard another of the progeny – Her Command, by Commands. Also trained by Fliedner and raced in conjunction with Wingrove Park – the four-year-old mare has placed in four of her 11 starts and looks ready to break her maiden status.

In the interim her half-brother In Fairness continues to fly the flag proudly having now registered four wins and $68,275 in stakes earnings. Congratulations to all involved and fingers crossed his next victory is around the corner!