In Fairness breaks run of seconds 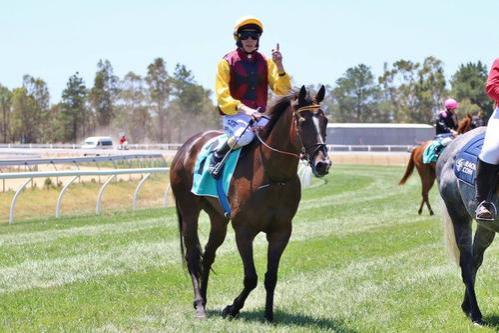 FOLLOWING 10 seconds from the studs past 20 starters the victory of In Fairness at Ararat on Thursday came as a welcomed change of luck as the son of Denman strode away for a dominant victory.

For the past eight weeks visits to the runners up stall were becoming all to familiar with half beaten less than a neck – but a painless 2.5 length win under the guidance of Damien Thornton having his first ride aboard the four-year-old was just the tonic in the $20,000 Ararat Farm Supplied BM64 Handicap (1300m).

Sent out the punters elect at his ninth run for the preparation, the victory was textbook from Barrier 1 finding his favourite role and quickening sharply off the home corner to put pay to his twelve rivals.

“This horses turn of foot is his key asset and he left them floundering on Thursday which should assist him in winning better races,” enthused Wingrove Park CEO Joseph Vella.

The victory brought up career win number three from 12 starts and followed two narrow defeats at Kyneton and Horsham where runners broke the track record. In Fairness remains undefeated at the Ararat circuit having romped in at his maiden win in January earlier this year.

“We have a strong opinion of the horse and he is continually learning each time he races, we see no reason why he can’t measure up at metropolitan level,” explained Vella.

In Fairness would join fellow metropolitan winners Portal, Count The Diamonds and Fair Trade if he were to achieve the feat from the dam Villa Igea. A multiple winner herself, Villa Igea has been a prolific producer for the horse stud most notably with the Group 3 C.S. Hayes Stakes courtesy of Fair Trade. Having produced nine foals to race for six winners at the age of 23 the daughter of Papal Power has been retired from the breeding barn but remains on the property.

There is every chance that record but be enhanced this weekend as Her Command (by Commands) is out to break her maiden status on the back of two bridesmaids finishes. The latest of the Villa Igea progeny (2014 Skilled filly) was sold for $43,000 at the recent Melbourne Premier Yearling Sale.

In Fairness is the fifth winner for Wingrove Park this season and has now earned just short of $50,000 for his connections.