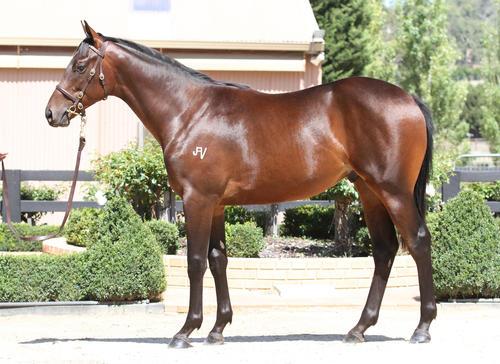 THE 2016 Inglis Melbourne Premier Sale has been hailed a great success by Wingrove Park who offered a draft of four exceptional yearlings through the Oakland’s Junction sale ring.

With competitive buying a welcomed trend amongst the sale, the Kerrie based horse stud offered four lots throughout Session 1 & 2 contributing to a gross total of $283,000 for the bloodstock offerings.

“It was pleasing to see demand for our horses at auction - for a stud of our size to top the offering of two stallions was a fantastic achievement,” explained Wingrove Park CEO Joseph Vella.

Wingrove Park opened the batting on Day 3 of the sales with Lot 363 (pictured) setting the pace selling for $160,000 to Cameron Cooke Bloodstock. The son of Lonhro sat at the top of the table from five yearlings offered by the 11x Group 1 winner and hailed from the stakes winning mare Sparks Fly.

Later that afternoon – a close relation to the above colt was offered by Denman fetching $60,000 to New South Wales based trainer Kerry Parker. The eye-catching yearling is a half-brother to three stakes performers and was the third most expensive lot put through the ring by Denman, a stallion Wingrove Park have enjoyed recent success with including Flying Spark and In Fairness.

New Zealand buyers came to the fore on the final day of the sale, firstly taking home our Chestnut Reset colt Lot 675 for a bargain $20,000. With his half brother Silent Man winning the day prior at Bendigo, the colt was purchased by the Beatson family and was the first foal offered at auction from the mare Silent Spring. A $43,000 result closed the account when smashing Skilled filly Lot 699 sold to New Zealand’s Frank Ritchie. The filly is a 3/4 sister to Group 3 winner Fair Trade and is closely related to stallions Danewin and Commands and subsequently fared well in the sales ring.

“A big thanks goes to those who assisted us in preparing the yearlings for the sales – it certainly is a labor of love but the horses paraded magnificently thanks to the professionalism of our team,” said Vella.

Wingrove Park wishes the new connections of our draft the best of luck and we look forward to following their progress on the racetrack!