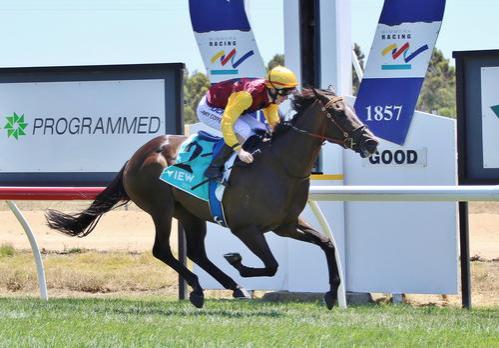 DENMAN gelding In Fairness returned from a spell in emphatic fashion last Friday putting rivals to the sword in the $20,000 Ararat Farm Supplies Maiden Plate (1100m).

The four-year-old had not been sighted since June 2015 on the back of his initial campaign but the Shane Fliedner trained galloper appears to have relished the break leading throughout for a comprehensive 3¾ length victory. Allocated the outside alley, hoop Harry Coffey, subsequently Fliedner’s nephew, decided to take bad luck out of the equation aboard the well-backed $2.70 chance that led his ten rivals a merry dance.

“He still needs to learn to come back and race properly with a sit behind the leaders but the win will do him the world of good,” remarked Fliedner to Winning Post this week.

Bred and part-owned by Wingrove Park’s Joe and Daira Vella, In Fairness hails from the well related mare Villa Igea making him a half-brother to the studs banner thoroughbred Fair Trade. Fair Trade was undefeated in two starts at Flemington including a 3¼ length win in the 2009 Colin Hayes Stakes prior to being sold to Hong Kong and trained by Casper Fownes. The son of Danewin won three races offshore before being retired to Vella’s Kerrie property.

And while the future appears bright for In Fairness, Fliedner is adamant to stick to his patient method and reap rewards.

“We might hold off going to town at this stage, teach him a bit more and see where we end up but I think there’s scope to get out in trip,” Fliedner explained.

Wingrove Park has listed the half sister to In Fairness by Skilled as Lot 699 at the upcoming Inglis Melbourne Premier Yearling Sale.

The stud who has six horses on the books with Fliedner could be in for a successful Autumn period with the promising duo Flying Spark and More Spark gearing towards the Adelaide Carnival.