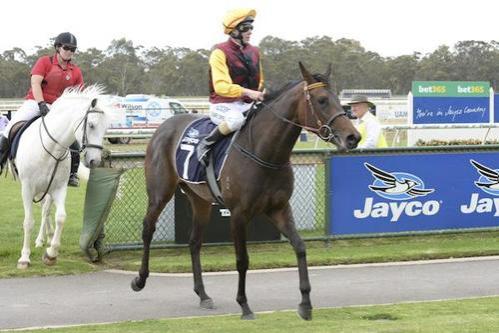 WINGROVE Park mare Dual Spark has produced her sixth winner from as many foals courtesy of More Spark’s win in Wednesday’s $23,000 bet365.com 3YO Maiden Plate (1600m).

The Fliedner stable has trained three of the progeny for breeders Joe and Daira Vella - most notably Sparks Alight who won the Gold Bracelet in 2012.

More Spark was sent out $3.80 at her fifth run for the campaign which had consisted of two narrow seconds and slotted in behind the leaders. Ridden by Harry Coffey the filly set sail for home on the corner and tenaciously fought off Kaluah (Peter Moody) and Howard Be Thy Name (Darren Weir).

“She was beaten in the straight but to her credit she fought really hard and gave her all and that’s a credit to her and she is pretty well bred so it’s good for Joe (Vella) to get a win with her and it’s well deserved,” Coffey said post race.

The daughter of Domesday will now head to the spelling paddock and return for the autumn with the Adelaide carnival on the agenda.

“She is probably yelling out for the paddock but we just wanted to get that win and today she got that and heads for a well deserved spell now and hopefully she comes back bigger and better and a nicer horse next time,” explained Coffey.