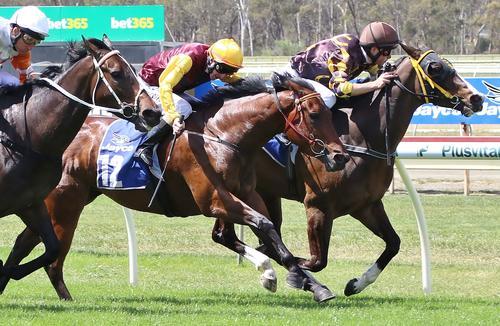 IT was a case of close but no cigar on Bendigo Cup Day for Wingrove Park bred fillies More Spark and Flying Spark who both finished second in their respective races.

The afternoon become even more frustrating for trainer Shane Fliedner who trained a total of four second placegetters on the ten race program – none closer than the Wingrove Park duo.

Race 1 set the tone when Domesday filly More Spark finished within a head of race favorite Tavi Bay in the Champions IGA Maiden Plate (1600m). Forced to settle last from the outside barrier, the three-year-old finished off her race strongly to register another eye-catching second following her performance at Benalla on October 13.

“More Spark is an exciting staying prospect who is a strongly built filly that is showing us good turn of foot and plenty of natural ability,” Wingrove Park CEO Joseph Vella explained.

More Spark after a luckless debut has been beaten a combined 0.6 lengths in her last two outings. The filly hails from Dual Spark who Wingrove Park raced to metropolitan success and has been just as much success in the breeding barn producing six foals of which five are winners and three black type performers. We are confident More Spark will make it a clean sweep for her connections very shortly.

Flying Spark was Fliedner’s last chance to register a win on his hometown cup day and for a fleeting moment it would appear the stars may finally align in the Stride Events BM70 Handicap (1100m).

Shooting for her second win in her first campaign, Harry Coffey put the Denman filly outside the leader Shadowofyoursmile who she wasn’t able to run down.

“She has impressed us with everything she has done so far and we predict a bright future for this tenacious filly,” Vella added.

In four career starts Flying Spark hasn’t finished worse than fourth and has been forced to race in open company at each outing. She is the first foal from stakes winner Sparks Fly who has since left foals by Medaglia D’Oro and Lonhro.

Wednesday’s performances has now added to the tally of four second placegetters in the last five years on Bendigo Cup Day but you can guarantee we will be back next year trying again.

We hope all our owners had a wonderful day and thank the staff at Fliedner’s Racing for turning the horses out in magnificent order.