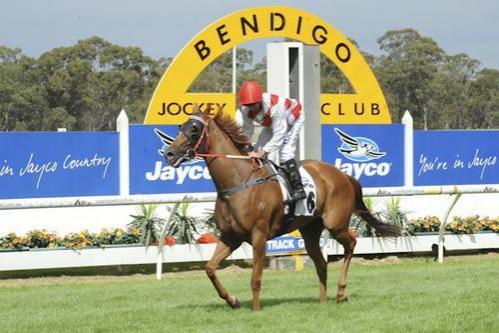 OWNERS of Good Music have learnt that patience is a virtue in racing and as a result rightfully celebrated when their smart Primus mare scored her second win on Saturday’s Marong Cup Day at Bendigo.

Deep into her third preparation Good Music was installed second favorite on the back of a chequered campaign - but a tasteful ride from Steven King ensured she put her best foot forward in the $15,000 Jack Drechsler Memorial BM64 Handicap (1500m) scoring comfortably by 1½ lengths.

Racing back into form with a solid second at Ballarat on January 8 in a strong form race before an even effort in Mares company at Moonee Valley had connections hopeful she would reunite herself with the winners circle.

“This mare has promised she can race at a high level and after her win we are confident she will vindicate our high opinion and reach her full potential,” Wingrove Park CEO Joseph Vella explained.

Having placed at metropolitan level on three occasions (twice in Melbourne Saturday company) it has been a frustrating 14 months between drinks having last saluted at Bendigo in November 2013.

Drawing favorably on Saturday in a wide barrier to aid her racing style, Good Music settled in the second half of the field and subsequently raced three wide without cover from the 800 metre-point. Peeling widest in the home straight gave her maximum momentum to overhaul her rivals in convincing fashion and to the cheer of her 15 plus shareholders.

The four-year-old who boasts a solid hometrack record will be out to chase one of the richest races at the Bendigo Jockey Club on March 21 in the $110,000 Bendigo Gold Bracelet (1400m). Joe and Daira Vella are chasing their second win in the races short three year history claiming the inaugural 2012 edition with Sparks Alight.

Bread and leased by Wingrove Park - Good Music is a descendent of Naturalist (by Palace Music) who has produced six individual winners most notably stakes placed Hoodlum.