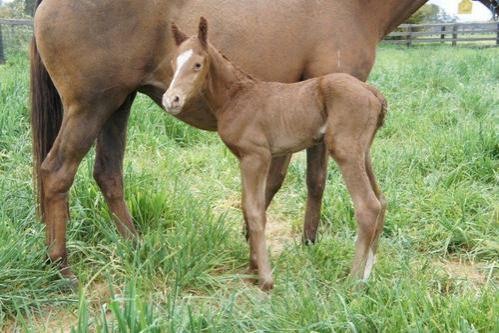 THANKS to Basinghall Farm, Nagambie on Wednesday morning at 5:10AM we had our first foal for the season.

27 days after being due to foal this chestnut Reset x Silent Spring - Colt (pictured) is very happy and healthy as our photo portrays at just nine hours old. The Colt is from an un-raced mare from the Vella's prolific broodmare Naturalist named Silent Spring.

This was the mares fifth foal with three to race all winners. Pandaconi (by Bianconi) was sold abroad and has won four races. Meanwhile Wingrove Park and Shane Fliedner have retained Primitive Man (by Primus) who is a Saturday Metropolitan winner in Victoria and emerging gelding Silent Man (by Al Samer) who is a dual Saturday Metropolitan placegetter. Silent Spring also has an unnamed 2YO daughter by Gonski.

Wingrove Park has eight mares in foal this season due to drop in coming weeks and months.