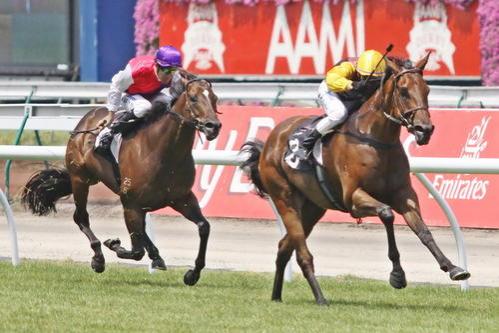 A fitting end to the career of Fair Trade, has seen the Kerrie-bred galloper return home to retirement under the care of breeders Joe and Daira Vella at their Wingrove Park property.

The seriously talented son of Danewin who scored effortless victories in his two career starts at Flemington (including a 3 length win in the 2009 Group 3 C S Hayes Stakes) was on-sold to Hong Kong undefeated. Winning three races offshore Fair Trade was an earner of $810,817 (AUD).

Under the care of champion trainer Casper Fownes the horse was a three time winner in Hong Kong, but constantly battled injuries, prompting his trainer to say ‘he would have been a serious Group One winner if he’d been sound’.

"Under the contract when the horse was sold it stated the horse was to return home upon retirement. We will ensure he has a pleasurable one," Wingrove Park CEO Joseph Vella explains.

"He has settled in back-home very well".

Fair Trade's dam Villa Igea who is currently in foal to Skilled - has unnamed foals by Denman (2011 colt) and Command (2012 filly) on the ground.