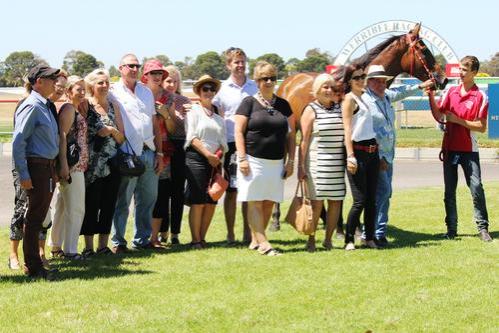 DAMIEN Oliver was at his brilliant best on Sunday at Werribee getting the saloon passage through on the Shane Fliedner trained Silent Man to take out the $17,500 White Horse Truck & Bus SV Maiden Plate (1425m).

Having come up with barrier one, Oliver didn’t go around a horse on the short priced $2 favourite who was coming off a close-up debut second at Caulfield 11 days earlier.

“He has always shown us plenty of ability and it was nice to go there (Werribee) and win on Sunday,” trainer Shane Fliedner said.

An eye-catching official trial at Cranbourne in August 2013 had punters longing for his debut but Fliedner tipped him out and kicked off with an unlucky defeat when in markets at Caulfield.

“The other day he got unbalanced in the wrong part of the track but the effort was still very good,” Fliedner told Winning Post.

Whilst the short term success of Silent Man has his large ban of owners rightfully so excited looking ahead Fliedner sees a big future for the three-year-old son of Al Samer.

“Physically he is a big gangly horse too so he will furnish out into a nice horse after a break,” added Fliedner.

When that break comes remains to be seen with Fliedner looking at taking on a restricted metropolitan race next start.

“These horses are best taught by racing so I might try make the most of his Vobis eligibility and space out his runs over the summer – there might even be a stakes race for him,” said Fliedner.

Silent Man is a half-brother to Fliedner’s Primitive Man who ran at Caulfield on Saturday in the Listed John Dillon Stakes and going forward the stable is positive about his prospects.

Both horses have been bred by Joe & Daira Vella at Wingrove Park who are in the ownership of each of them. They are also responsible for the breeding of Good Music who is a smart three-year-old who is expected back in work in a fortnight’s time.