Good Music in tune at Bendigo 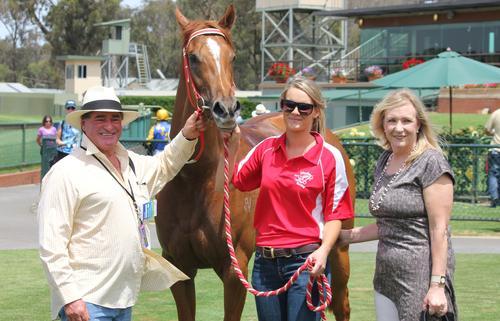 By the Flying Spur stallion Primus – also the sire to the stud’s metropolitan winner Primitive Man who is closley related to Good Music, she saluted at her third career start and did so in comfortable fashion with Chris Symons in the saddle. For a fleeting moment favourite backers were sweating on luck, but a timely ride by Chris Symons saw the filly mow down the leaders.

The three-year-olds prior performances hadn’t gone unnoticed with her prior appearance when second at Bendigo shown on the TVN Blackbookers program.

Syndicated and bred by Wingrove Park, there were a large group of happy owner’s trackside a lot of who were soaking up their first thoroughbred racing victory. Just as exciting were the post-race reports from both rider and trainer who have high opinions of Good Music. From a damline that often takes time to mature and race over distance it’s good to see her raw talent on show early in her career whilst also displaying her family traits.

“She is from the Palace Music family and possesses a great turn of foot aided by sheer determination”.

Trainer Shane Fliedner continued his knack with the breed and from six of Naturalist’s winners, Fliedner has saddled up five of these. The stable had a good day with stablemate Churchill Express scoring a deserving victory in Race 5.

We look forward to sharing many more thrills with her connections in the near future.