Man did he let down at Caulfield! 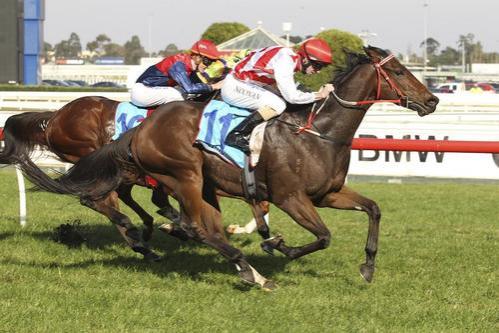 PRIMITIVE Man was the horse on everyone’s lips at Caulfield on Saturday, after a barnstorming finish saw the Shane Fliedner trained galloper come from last to take out the $80,000 Arthur Gauci Handicap (1200m).

Having drawn the outside alley first-up from a spell, Primitive Man met his hottest field to date and bookmakers installed the son of Primus a $61 chance. Eased to the tail end of the field on a leader dominated day, the horse went against the pattern and came to the outside.

300 metres from home it seemed Primitive Man would be running on into a midfield position, only to let down in incredible fashion late in the piece, to gobble the leaders up and go on and win by ¾ length.

“The last thing I said to the owners was there were a few things against us – but good horses can overcome these,” a pleased Shane Fliedner told Winning Post this week.

“I was more surprised at the price than the result”.

A bet at 900/1 was taken on Primitive Man in the run – a record breaking winning dividend for the corporate bookmaking giant Betfair.

Having not put a foot wrong in his first campaign, Primitive Man’s three runs included a Bendigo maiden win and a Moonee Valley placing. On debut over the short course, he was seen running on in a hot form race taken out by Miss Softhands. Next time out he won in easy fashion at Bendigo before an eye-catching second to Group 2 winner Meliora prior to the New Year at the Valley.

In typical Fliedner fashion, he is adamant not to get carried away but admitted Primitive Man has the makings of a horse who can win better races.

“It is winter racing and he would need to continue to improve to be serious threat in the Spring,” Fliedner admitted.

“All going well he should take improvement and mature, while getting out to his right trip (1400-1600m) indicators that he can measure up later in the year to the better races”.

The stable will most likely head back to Caulfield on Saturday May 25 for an $80,000 1400m Handicap for three-year-olds.

His trainer admitted to media post-race that Primitive Man is potentially the best horse he has trained. Fliedner has put the saddle on some smart types including the likes of Classaconi, Little Dozer, Jakodae, Tollesprit and Laura’s Charm.

Bred and part owned by Fliedner’s strong supporters, Wingrove Park, Primitive Man is from the dam Silent Spring who is a daughter of Naturalist (half-sister to Naturalism) being part of the Vella’s string of broodmares. Several of the progeny have raced for the partnership including Hoodlum, Diva La Belle, Win Esprit and Gemset.

Congratulations to all the owners involved, who can share in prizemoney totalling over $100,750 from just four starts.