Sparks Alight is the best Sprinter in town! 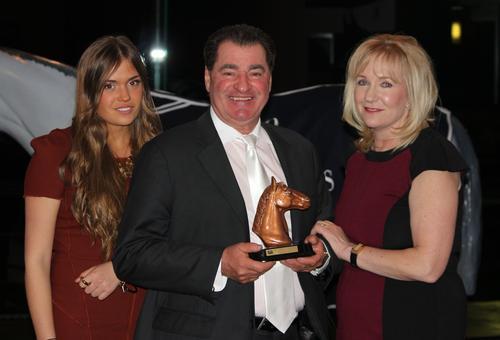 AS a result of her performances throughout the 2011/2012 season it was with great honour Wingrove Park accepted the award of the Sprinter of the Year - with thanks to Evolve Accounting Solutions at the Bendigo Trainers Association Racing Awards evening on September 10.

Courtesy of a stellar season from Sparks Alight, her season culminated in four wins and five placings - including two metropolitan wins highlighted in March when taking out the innagrual $90,000 Gold Bracelet at Bendigo.

On behalf of Wingrove Park, CEO Joseph Vella accepted the award and thanked his own team as-well as those at Fliedner's Racing on the mares achievments in-front of an attendence of close to 150 people at Silks Function Centre.

This was the second year Wingrove Park had been recognised, last year Sparks Burn was victorious in the two-year-old category.

Trainer, Shane Fliedner had a sucesfull evening when he took out the Bendigo Advertiser 2012 Trainer Premiership which saw him saddle up 21 winners throughout the season. His tallented three-year-old Livigno was also recognised taking out his respected category.