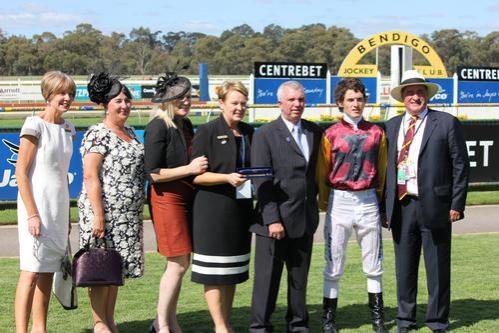 SHANE Fliedner produced one of his career training highlights on Saturday, when in front of a bumper local crowd his popular mare Sparks Alight saluted in the inaugural $90,000 Catanach’s Jeweller Golden Bracelet (1400m).

The Rakti mare who is bred and part-owned by Joe and Daira Vella from Wingrove Park has had a stellar campaign, after finding winning form only a fortnight ealier at Moonee Valley first-up. In a courageous on-pace effort, Jacob Rule once again rode a perfect race aboard Sparks Alight who was aided by a fast tempo from the Allen Browell prepared Two Hills who ran a strong race to finish third.

“Jacob rode to instructions and the race played out just how we would have liked,” Fliedner reported to Winning Post earlier this week.

Kept safe in betting, connections were hopeful of a forward showing with the mares excellent home track record which now stands at eight starts at Bendigo for four wins and four placings. The four-year-old who is from the valuable broodmare Dual Spark has always shown ample ability and connections believe with maturity and the tinkering of gear, they now have the horse ticking over nicely, with earnings now standing at over $148,000.

A benchmark rating increase of 10 points after Saturday’s metropolitan victory has her in good stead to gain a start on April 28, in the stables ultimate goal the Group 2 $175,000 Queen Of The South Stakes (1600m) at Morphettville, with the chance for mare to earn valuable black-type.

“That race has been the one in the back of our minds all along and I think over 1600 metres she will prove very effective... we just need a lead up run or two now,” explained Fliedner.

Fliedner has been earning good results for the Wingrove team with three winners (two metro) from six starters this year. Last year the combination recorded four winners from 28 starters and weighed in at over 50% of their runs. With nine horses in work with Fliedner and plenty more to come through the ranks, this partnership is looking to build a solid future.