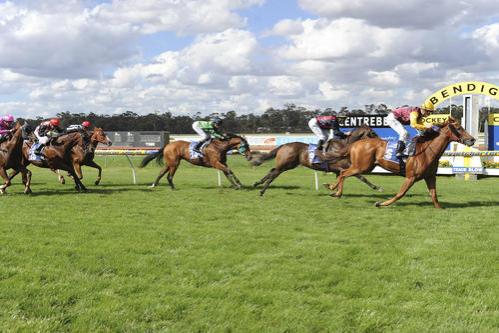 Punters were confident the three-year-old son of Niello could record his second career victory on his home track and installed him as favourite, although a little easy late in betting. The plan was to run the gelding at Moonee Valley in a 1200 metre event, although large nominations forced Fliedner to step him up sharply to the 1400m at Bendigo.

“Stepping up to the 1400 metres second-up on a wet track, as a three-year-old having to carry 59 kilograms was certainly no easy task,” explained Fliedner.

After a tardy get away, a patient ride from Mark Zahra saw Sparks Burn improve to a midfield position and continue to track-up out wide before letting down with a strong finishing run to overhaul Providential by just under a length.

“I was very happy with how he relaxed in the run. He is still a fair way off maturity wise, and I think he’ll be most effective out to 1600 metres so there’s abit of upside to him yet,” Fliedner said.

Connections intend following a similar path to Sparks Alight with a plan to run him on Saturday March 17 in the $90,000 Bendigo Guineas. Following on from that, Sparks Burn is also expected to line-up in Adelaide over the Autumn period.

Fliedner intends taking a small team to Adelaide in coming months and was hoping some others in the stable would “step up to the mark” in the next few weeks.

With 13 broodmares on the property, Wingrove Park runs on a philosophy of “quality rather than quantity” according to the Vella’s and the results are starting to speak for themselves.

The team’s last 10 runners have resulted in four winners and four placings.

“A big part of the success we have is in our feeding programs and have to thank Dr. John Khonke for his continued assistance in this area ” Vella explained.