Warrnambool favourite a maiden no more 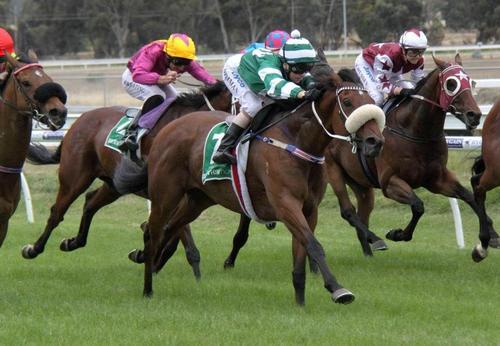 WINGROVE Park bred galloper Insiders Favourite made it a family affair at the Wimmera’s Stawell racecourse on Saturday when she saluted for popular Warrnambool trainer Anne McGrath in partnership with her nephew, 22-year-old Josh Julius.

Julius is the son of former Kiwi and jumps rider Geordie Julius, who rode mainly in the western district obstacle races.

Insiders Favourite or more commonly known to her owners as "Nellie", was purchased from Wingrove Park in July this year after a preparation with the Shane Fliedner yard.

Julius in combination with Piston Broke Syndicate manager and Wingrove Park photographer Peter Morganti (founder of Morg's Sportz Photography), purchased the Niello mare with the hope to secure a handful of victories over the Christmas-New Year period in the Western District.

Two runs later and the plan had come to tuition after Insiders Favourite saluted in the Northern Grampians Shire Maiden Plate (1100m).

The two dedicate race-goers along with the Piston Broke Syndicate - a bunch of mainly first time racehorse owners could be seen heading straight to the winners bar to watch the beautiful reigns work of Warrnambool based apprentice rider Jackie Beriman.

Sister of Group 1 winning jockey Nikita, Jackie is making a name for herself in her own right. Having began race riding at St Arnauds Cup meeting this year (October 29), the youngster has ridden eight winners and ten place-getters.

Beriman also partnered the mare on debut at Mt Gambier a little over a week ago to finish fourth - but a more patient riding style was rewarded yesterday.

Settling back early doors, the five-year-old mare tracked into the race well before what Radio Sport National broadcaster Rick McIntosh described as a "flat-spot". Overcoming this, she knuckled down late in the piece to score in strong fashion suggesting there may be more wins in-store. Placegetters were Drink Me (Carolyn Massey) and race-favourite Kinther Royale (Tony Parker).

As goes with all racing ownership, the connections have certainly been patient with what some would describe as this "cheeky" galloper. But a sea-change and one-on-one attention is now showing her true colours.

By Niello, Insiders Favourite dam is the long standing Wingrove Park broodmare Naturalist who now from six foals to race has produced four winners. Among these are black-type earners such as Hoodlum and the talented Diva La Belle (Gr.1 Crown Oaks starter) and Win Esprit (Hong Kong galloper). Naturalist herself only raced on two occasions for midfield finishes in country maidens, but has certainly made a name for herself on the breeding stage. She recently gave foal to a black Octagonal Colt. She also has un-raced gallopers by Primus and Kempinsky; the Kempinsky filly has recently been syndicated and doing well in her first campaign under the guidance of Shane Fliedner.

From the wonderful surrounds of Wingrove Park to Warrnambool's pictureque bayside we would like to congratulate the owners on what is hopefully the first of many winners with Insiders Favourite.