A Fair performance at Sha Tin 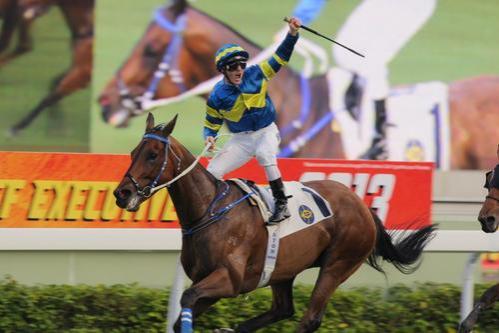 AUSTRALIAN jockey Zac Purton stood high in the irons to give a victory salute after steering Fair Trade to victory at Sunday's opening meeting of the Hong Kong season at Sha Tin.

Purton guided the eight-year-old home for his first win since February 2010 in the Cotton Tree Handicap (1400m) with the success drawing a celebration worthy of a Group I race.

"I just know the frustrations and how much heartbreak there's been for Caspar and the horse's owner with Fair Trade, and how much work has gone into getting him here," Purton told the South China Morning Post.

"When I did press, he gave me the kick I was looking for."

Fair Trade (Danewin x Villa Igea) was bred and raced by Wingrove Park's Joe & Daira Vella - recording two Flemington victories from as many starts prior to being sold to Hong Kong.