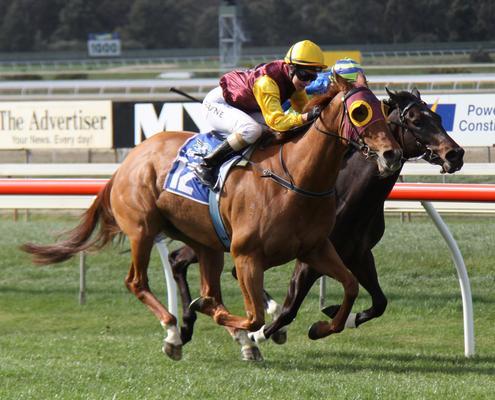 IT was a case of ‘ironing out the creases’ according to Wingrove Park’s Joseph Vella, which reunited Sparks Alight with the winners stall at Bendigo’s Taste of Spring Meeting last weekend.

Astute punters would have been grinning when $10 was put on offer for the Rakti mare, whose latest run at Ballarat on August 31 was one for the black-book.

Pre-race, local trainer Shane Fliedner outlined the concern of an outside barrier draw (16) and connections were not brimming with confidence either. “There were a few negatives for the horse last Sunday but we were proved wrong and she overcame those strongly,” Joseph Vella reported to Winning Post this week.

“Even though she drew wide and sat three-wide without cover, she still finished strongly and never gave in”.

Vella explained it was tampering with gear including a barrier blanket and blinkers which had aided the mares form reversal. “We always knew she was capable and with her Dual Spark bloodlines she should go on with Sunday’s win,” Vella said.

Dual Spark has been a stellar producer for the Wingrove Park operation having left black-type gallopers Sparks Fly, El Spark and Sparks Burn.
“Statistically we think Sparks Alight will earn some black-type. Her family also indicates she will get out to 1600 metres,” stated Vella.

Sundays win an impressive victory and she showed a distinct liking for her home track. From three starts she has had two victories and an unlucky third placing.

In a fighting finish she held off a determined and talented former New Zealander Simpre Arriba from the Ciaron Maher yard – certainly worth watching.

Immediate plans for Sparks Alight will see her head towards a city race prior to a short spell before a tilt at the Spring Carnival.

With a strong winning strike-rate there looks to be a solid future ahead for the Wingrove Park team.