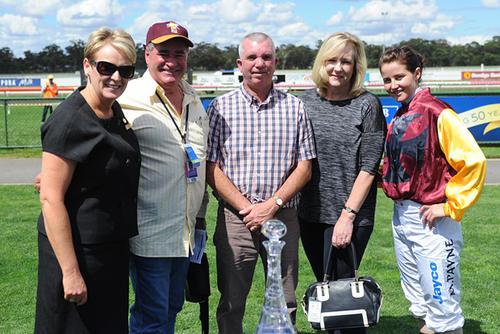 WINGROVE Park unveiled their next star of the turf at Bendigo Racecourse - the Nursery of Champions - on Thursday 9 December with three-year-old filly Sparks Alight (Rakti-Dual Spark) impressing with a fighting win in the $15,000 Melbourne Football Club Coterie Maiden Plate over 1100 metres.

Ridden by Michelle Payne and under instructions from local trainer Shane Fleidner Sparks Alight was stoked up from her outside gate to lead from the jump. Down the side she showed enormous natural speed and was more than matching strides with the well fancied Jungle Fighter. Turning into the straight Jungle Fighter quickly surrendered which left Sparks Alight alone to make the long run to the winning post.

Half way down the straight a family of crows did their best to spoil her winning debut by flying in her face but the filly shrugged the feathered pests away before settling down to fight off the Lloyd Williams pair of Weighted and Roll.

It was the win of a classy filly destined for city races and ultimately Black Type - the goal of all Wingrove Park horses.

Michelle Payne was glowing in her praise of Sparks Alight on TVN post race.

"She's a really nice filly and although green with her ears pricked today I had a lot of horse under me as we turned for home. The win had a lot of merit and Sparks Alight has a lot of talent."

The margin in the end was a 1/2 head and the time 1-4.94 but it was noticeable that Michelle was very kind to Sparks Alight in the run home with the filly doing the job comfortably under her own steam.