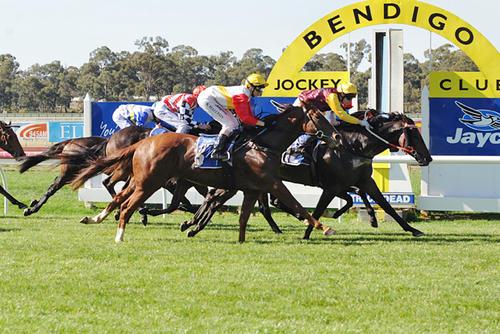 RACING at Bendigo on April 26 threw up a surprise for local trainer Shane Fliedner and owners Joe and Daira Vella when lightly raced galloper Win Esprit broke through as a maiden in a Country Showcase 0-68 event over 1300 metres.

The rank outsider ($18) upset stablemate Gracious Babe, who was only marginally better fancied at $17.

Ridden quietly by Craig Newitt, the Bel Esprit gelding tracked into the race well and fought to the line strongly, running the trip right out to win narrowly.

"This was a bit of a surprise to us all as his pedigree indicates he’s looking for more ground," explained Joseph Vella, manager of ownership syndicate Wingrove Park.

"The horse can be a little lazy at times so we told Craig (Newitt) to ride aggressively on him. He is still maturing so there looks to be a bright future ahead."

Win Esprit is out of the Palace Music mare Naturalist, a three-quarter sister to former champion middle-distance galloper Naturalism.

Naturalist is the dam of Hoodlum, Diva La Belle and the recently retired Insider Favourite, all bred by Wingrove Park and trained by Fliedner.

The win of Win Esprit made up for the earlier defeat of Pandaconi, a well supported runner for Fliedner and Wingrove Park.

"Pandaconi has a lot of ability and was ridden up-side down on Tuesday. With a sit behind the pace we should see a better horse," said Vella.